The definitive test for patent eligibility of process claims

Bilski et al. filed a U.S. patent application with claims essentially drawn to a method of hedging risks in the field of commodities trading. The examiner rejected the claims under 35 USC 101 for not being limited to a practical application of an abstract idea. Bilksi et al. appealed the rejection to the Board of Patent Appeals and Interferences (Board). The Board affirmed that the claims were not patent eligible under §101, but also noted that the examiner had come to the conclusion of patent ineligibility of the claims using a "technological arts" test not supported by the case law. Bilski et al. appealed the Board's decision to the Federal Circuit. The Federal Circuit also affirmed that the claims were not patent eligible under §101. 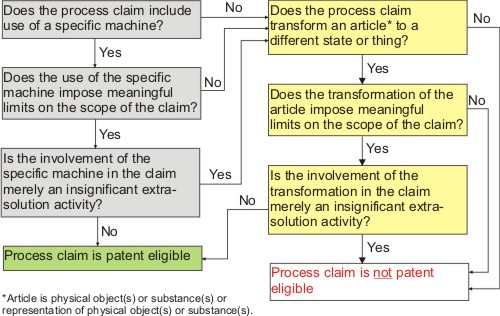